Esther at A Catholic Mom in Hawaii recently posted about obtaining patron saints for 2008.. So I decided to request a patron for 2008 and much to my surprise, I wans given St. Clare of Assisi. 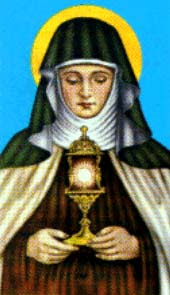 I found this to be a bit ironic since my friend, Sr. Rosemary, who recently passed away, was a Franciscan Sister. And St. Clare is one of the patrons of her order. So I checked out the order's website and found the following on St. Clare of Assisi:

"Clare was a dozen years younger than Francis and a member of the noble class. Her life was far more sheltered but, like her mother, Clare was known throughout Assisi for her generosity to the poor. At a young age, Clare developed a deep spirituality and was drawn to the teachings and lifestyle of Francis. She met with him on a number of occasions until finally, in the middle of the night following Palm Sunday, she left her parents' home and found her way to Francis and the brothers.

There Clare made her commitment to God and to the poor and simple lifestyle that Francis preached. Even when her uncles came to remove her from the convent where Francis had placed her, Clare did not waver. Nor did she falter when other women of nobility, including her younger sister, joined her. Like Francis, she cared for her followers, taught them by word and example, wrote for them a simple rule of life, and stood up to bishop and pope for the privilege of living the life to which she felt called.

Followers of Francis and Clare can be found today in every walk of life and on every continent—still joyful, still seeking a simple lifestyle, still seeking to love and follow the God who lives in their own depths and in all of creation. Theirs is a common vision: identification with the poor; care for creation as a sacred trust; embrace of each person in relationship as sister or brother.

Like Francis and Clare of the twelfth century, today's followers of Francis and Clare can be recognized by their lived faith in a God of love, by their deeds of care and generosity, by their care for all creation, and by their daring to live Gospel lives whose values run counter to the culture of their times."
Posted by Ellen at 12:54 PM

That's wonderful that St. Clare of Assisi is your patron saint!!