My love/hate relationship with fall 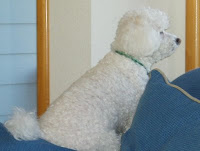 I used to love the fall. It was my favorite season of the year - the changing leaves, the cooler weather, the warm colors of the mums. And then, about 9 years ago, we discovered that our pooch was highly allergic to ragweed.

From the time she was about two or three, we noticed that she would start to scratch in mid-August. The first couple of years it was tolerable. And then we moved across town and the scratching became almost violent. After almost overdosing her on steroids with no success, we were steered in the direction of the Veterinary Hospital at the University of Pennsylvania. There she was put into the care of Dr. Kevin Shanley, a veterinary dermatologist.

After being anesthetized and having a large patch of fur shaved, Maxie was subjected to many skin tests and it was discovered that she is extremely allergic to ragweed. According to the Doctor, the skin tests are rated on a scale of 0 to 4 for their reaction. Maxie scored a 10 on her reaction to ragweed. According to the vet, this was a reaction that he had only seen about 6 or 7 times in his career.

So we began allergy shot therapy and basically, although she gets shots all year, she is still highly sensitive to ragweed and still has horrible reactions to it. She scratches, she bites and she rubs her face on the carpet. You take a chance trying to pet her because her skin is so sensitive and when it hurts, she lets you know. She sheds small cotton balls of fur even though she is a non-shedding breed. And our fall is spent inside the house, with the air conditioning on, driving her weekly to the vet for her allergy shot (she won't let me give it to her and it's just easier to let the wonderful techs at our vet office do this - and she doesn't even flinch for them) treating her with antihistamines, steroids, baths with prescription shampoo and lots of TLC. And I wish away my favorite season as I anxiously await the first killing frost that will relieve her symptoms.

So I still love the fall for it's vibrant colors, cooler temperatures and mums. But I sure do hate ragweed.
Posted by Ellen at 7:41 AM

I had a bichon that was allergic to grass...not pretty at all. But he was a trooper. Poor puppies, the suffering!