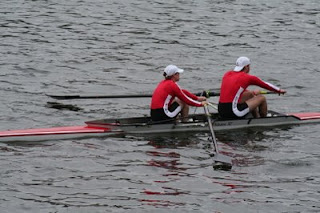 Regatta season is here and yesterday was spent on the banks of the Schuylkill River at the Murphy Cup Regatta watching our son (the one in the back) row and cheering on the rest of the team.

After early morning showers, the rain held off and the day, while damp, was rain free. The team did okay and our son and his partner finished second in their heat and moved on to the final. While they didn't place in the top three, the rowed a good race considering they have only been rowing together for about two weeks.

So for the next several weekends, we'll be on the banks of assorted rivers and sounds watching lots of sculls with no crossbones.
Posted by Ellen at 11:36 PM

I get to watch crews on the river once a day...it always makes me smile.

Congrats on winning the measuring cups at Pioneer Woman!

I love the idea of crewing although I've never tried it. I think my bottom is too wide. :)