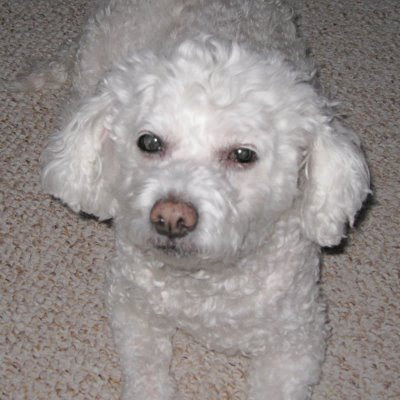 Had a dog emergency yesterday.  Came home from a morning outing to find our Maxie not well.  She had accidents in the house, had thrown up for our son and was now dragging her body on the floor and shaking.  So we packed her up and took her to the emergency animal hospital.
After checking in and her initial assessment, she started shaking again.  The tech notices her eyes shaking.  The vet did her exam and Maxie had a more intense seizure - she had apparently had several small ones.  We discussed the treatment plan and possible diagnoses.  With teary eyes, we left her in the hands of the staff for tests, fearing the worst.
We received a call a few hours later.  While she had had one more small seizure, her tests were negative - blood work good with only one liver function off and x-rays of her body revealed no tumors or cancer.  It's possible that there may be something in her head, but because of her age we have decided to not pursue this any further - at 15 plus, the risk of her going under anesthesia for an MRI are great and the cost is in the neighborhood of $2,000.  We love her, but could not justify putting her or us through this.  She was put on Phenobarbital for the seizures and was kept over night for observation.
This morning we were told that we could pick her up.  With the exception of her being a little unsteady on her feet from the medication (this should subside after her body adjusts to it), she's pretty much back to her old self.  She's begging for food, following me around like my shadow and barking when someone comes to the door.
Her prognosis is okay for now.  Not knowing the exact cause of the seizures doesn't help, but hopefully the medication will keep the seizures under control and her without pain or distress.  We'll follow up with her regular vet this week.
We love you Maxie!
Posted by Ellen at 8:34 PM

I hope that the new meds keep her going and happy! Glad that the initial prognosis was good.

This is the part about having a pet that I don't like in the least. I'm so glad she's returning to her normal self - may it last for a long time.

Oh this brings back memories of our bichon Boomer. I hope she stays healthy. Hugs to Maxie!

Awwww, sorry your little sweetie is having a tough time! I hope all will be well soon! She is so cute!

Fifteen years of love is such a long time for a pet. How lucky you were to have had this much time with her. Such a beautiful dog.