See this lady? That's my mom. And for the past two months she's been under the weather. 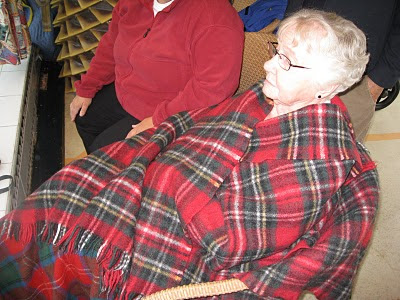 (Photo taken aboard the ship on our Alaska cruise - it was glacier watching day and the deck was a bit cold!)
She was recuperating pretty well from her back surgery in September, then BAM, she had a fall, broke her thumb and started feeling pretty yucky. She was having balance problems, memory issues and a few other assorted symptoms. I was quite concerned, but after surgery, she was reluctant to go to the doctor. I finally talked her into seeing the doctor last month. Some blood work - which she also balked at having done - revealed that she had too much calcium in her system and it was causing all these symptoms.
She was taken off the previously prescribed calcium supplements and put on a mild diuretic and in about 24 hours she was on her way back to her old self. Today we had a follow up appointment with her doctor and a consultation with an endocrinologist who concurred that this was the cause of her problems. She'll have some more blood work to make sure that her calcium level falls back into the normal level and stays there.
Trust your instincts - encourage your parents to see the doc if you thinks something is up. I'm so glad I pestered and persisted. It was a problem that's been easily remedied and we all feel much better!
Posted by Ellen at 10:31 PM

SOOOOO glad you got to the bottom of the issue. It will make vacation more restful for you and I am glad that Miss Peg is back to her feisty self!

You are a great patient advocate. And daughter;)

I can't tell you how often this happens!
I'll never forget when we thought my grandmother, who was in her late 70's and in good health, was going into dementia - with alarming speed. Her entire personality was changing before our eyes and in just a matter of days. My mom (her daughter) finally MADE her go to the doctor. After many blood tests it was determined her thyroid had decided to up and quit. Meds were given to correct that and in a matter of days, Grandma Mae was back to her good old self.
EVERY senior needs a patient advocate! So very glad for your mom she has you, Ellen!

First time to your blog. I saw a comment on another blog noting you were in southern NJ. I am too and excited when I see other NJ bloggers. Glad you trusted your instincts concerning your mother and that she is doing better.

Glad they found the problem. Your mom is blessed to have a daughter like you.

My sister's MIL refused to go to the doctor. Finally she did and had to have an operation of some sort. Immediately she and her husband began planning for her death! Seriously. My sister couldn't believe it. But when you get old, sometimes you go into the hospital and you don't come out. And it's scary to find out what's wrong sometimes.
But it's really good that you persisted, Ellen.

Hi Ellen....happy to hear your Mom is doing better and I think your advise is good advise for us all...Doctors aren't always right and when you think something is wrong trust your instincts....