So I've heard my son say "oh snap" about a million times. But two nights ago, I found myself saying the same thing. Nurse Nancy and Junior Bird Man (JBM) were visiting and we decided to go to Swal's for ice cream - we had been there Thursday with JBM and decided to go back on Friday with Nurse Nancy. As we approached the bridge just before town, I noticed that oncoming traffic was stopped. As soon as I passed the Jersey barrier and could see the road, here is what we saw: 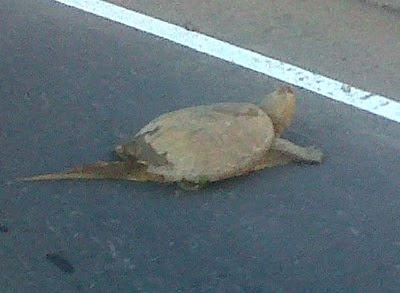 Yes, this rather large snapping turtle was making it's way, very slowly I might add, across the road and had traffic stopped. A man in the oncoming traffic got out of his car, asked my husband (who had gotten out to take this picture with his phone) if it was a snapper. Then he proceeded to pick it up by the tail (using a beach towel) and try to put it over the barrier. It wiggled out of his grasp and very angrily started to move away. He picked it up again and placed it safely out of the way of traffic.
Life in a small town - it's just so exciting on a Friday night! By the way, Swal's has the best ice cream I have ever tasted.
Posted by Ellen at 9:53 PM

Yikes! That was one brave man...

I concur! Cannot wait to go back another time...maybe our friend will be making his way back across the road?

Wow.. what a creature.