On The Wizarding World of Harry Potter 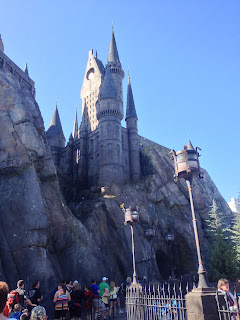 I didn't read any of the Harry Potter books.  And I think I only watched about 10 minutes of the first movie.  The fantasy/sorcery/wizardry genre is not my thing.  Give me a good love story or a good murder mystery to read and as far as movies, I want comedy.  I want to be entertained.

But on our trip to Florida, and more specifically, Universal Studios, I felt compelled to check out the Harry Potter ride.  I could have spent that hour and a half in so many more productive ways.  Like cleaning.  And I don't like to clean.

We hit the ride pretty early in the day.  There are no "fast passes" in Universal.  There's an "Express Pass" - an expensive alternative to the entrance fee that allows you to go the special line of any attraction with out fighting your way to a ride to get a timed pass like Disney.  We didn't choose this option, and in reality, with the exception of the Harry Potter ride, we really didn't find it necessary.  I think it's a much better idea than Disney as you pay a premium to eliminate the line rather than run around the park like mad men trying to collect that one "Fast Pass" that you are allowed and then hoping that you won't miss your time standing in line for another attraction.  Kind of like pay to play. I digress.

Any way, even early in the morning, the line was listed as a 90 minute wait.  So we got in line.  It moved.  Not quickly, but we didn't stand in one place for more than two or three minutes.  And to the credit of Universal, a the majority of the time we were in the shade.  And there were even fans to keep the air moving. On a lighter side, we did find "Waldo" in line - the picture I took didn't come out well enough, but there was a guy in line wearing an assortment of stripes in about ten different colors.  Once we got into the "castle," the line continued.  There were displays that referenced the story - I'm assuming, since I don't know much about it.  They were entertaining as far as the technology used.  But I didn't get most of it.  Fortunately, the cell phone reception inside the building was good and I could read e-mail and play some games.

Finally it was our turn to "experience" Harry Potter.  We were strapped into our seats and the adventure began.  For most of those in our group, it was the beginning of our turn to "experience" motion sickness.  And this has happened to me only one other time in my life - on the Road to Hana in Maui.  The ride is jerky and screens simulate things flying at your face.  For most of the ride, I closed my eyes to try to calm the nausea building in my stomach.  I couldn't wait for it to end.  And after about seven minutes it did.  And I was never so happy to get off of a ride in my life.

Will I ever ride this again - no stinking way.  It was worse than than the three hours I stood in line for Soarin'.  But that's a story for another day.

I echo your thoughts exactly. I spent most of the ride praying for it to be over, with my eyes closed and hoping not to puke on the stranger next to me.

I agree completely. Spent most of the ride with my eyes closed and praying not to puke on the stranger next to me

Too funny....the guys went on the Star Wars ride at the other theme park which the name escapes me last year and Miss B did great but Daughter and the Boss came off the ride green in the face...they were so out of it we had to leave the park....I know better then to go on these rides....I don't even like the tea cups in Disney...
We go in April and this time just going to Disney....hopefully B will outgrow the place real soon....for our sake.