Boy, has my life changed in the past five weeks!

At the end of March, my husband and I gathered up our coolers, filled them with water and Gatorade, packed up some granola bars and bagels and off we went (at 6:30 on a Saturday morning) to see our son row for the first time in Philadelphia. We set up our canopy, put out the coolers and snacks, sliced up the bagels and waited for the team to arrive.

And arrive they did. By mid afternoon, we had met many of the team members and a few parents. In fact, my husband knew one of the dads from the industry he works in. By the end of the day, we had made plans to do this again in two weeks, with hub's acquaintance bringing some food too.

So two weeks later arrives and we are once again packing the car and this time heading to the Cooper River on the NJ side of the Delaware, just minutes from Philadelphia, and we are setting up two canopies this time, along with a portable grill. This time, our offerings now include grilled chicken, baked ziti, salad and the rest of the snacks and drinks and this time, we meet yet another set of parents who have brought several thermoses of sausage and peppers for the kids. That night, we arrange to take the team out to dinner and another set of parents and the dad of two team members join us and share the bill for dinner.

Last weekend, we drove to a park outside of Trenton to see the conference championships where our son's school has taken second place for both the men's and women's teams and the coach has been named coach of the year. At this event, yet another set of parents has brought sandwiches for the team and several others have brought an assortment of goodies for the team to devour. At this event, we accumulate a decent list of parent's names, e-mail addresses and phone numbers and for tomorrow's event, we have a group of parents eager to volunteer to bring food to feed these starving young people. And somehow, we have become the organizing parents of the hospitality tent for the team.

Now this may seem like a bit of work, and I won't lie and say it isn't, but the rewards have certainly out weighed the work. We have met some pretty terrific young adults and some really great parents. But the best part has been to see our son and to watch him row with his team mates. And grow into quite a young man. 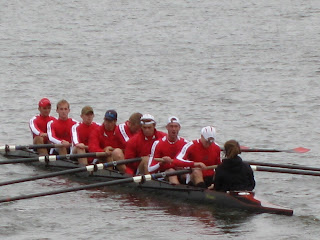 My handsome son is the third from the back in the green cap.
Posted by Ellen at 11:27 PM

That's cool! It's great that you're able to attend his events, and that he has so many ones local to you. With Little Brother, a Saturday track meet is just too long, so we have to be satisfied with the small meets on school days.
Enjoy the beautiful day and the company of your son's new friends, and yours!

Good for you, Ellen! Those hospitality tents are great!