I am sew crazy 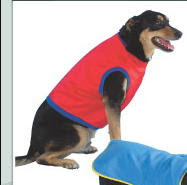 I have been doing some sewing lately. It's something that I don't do as often as I would like, because, while we live in a rather large house, I don't have a place that I can call my own as far as sewing - some place where I can set up and leave things in progress. I would like to set up an area in the basement, but not until the lighting - or lack thereof - gets addressed, it's not happening.

But two weeks ago, I broke out the machine and made a cape/coat for our friends' son who is going to be Obi Wan Kenobi for Halloween. And while the spirit was moving me, I thought I would make a coat for our pooch.

I had picked up the pattern last year for $1.00 when a sewing/crafts chain was going out of business. I found some cute polar fleece for the outside (black background with dog bones on it) and some camouflage thermal fabric for the lining. I carefully measured her for the jacket and based on her body length, I chose to make a large. Wrong choice. The jacket is partly done and it is obvious that it is going to be way too big.

So, I will finish the jacket and give it the aforementioned friends for their slightly larger dog and will start a new, smaller one for our Maxie.
Posted by Ellen at 1:41 PM

Nurse Nancy's reading over my shoulder and frothing at the mouth at the thought of getting such a cute coat for her Hope!
Sounds like that coat's going to be adorable!

How cute! And don't tell Maxie that you thought she was a large. She could get a complex.