Last week, we were on vacation in Florida.  In Orlando.  So we did the usual things one does while vacationing in Orlando.  A day (from hell) in Epcot - that will be a separate ranting post, two days at Universal - where I almost threw up after the infamous Harry Potter ride, and a day at Kennedy Space Center.  And then there were the final two days of vacation.  At Daytona.  The speedway, not the beach.

Our friends Nurse Nancy, Fly Boy and Junior Bird Man were on vacation with us.  Junior Bird Man used to go to school with the son of a NASCAR executive.  When we went to Florida three years ago, Mr. NASCAR provided the guys with tickets to the Daytona 500.  They really liked it.  And this year, Mr. NASCAR gave us all, including my brother and his wife who joined us on the trip, the NASCAR experience of a life time.

We checked in on Wednesday morning before heading to Kennedy Space Center.  We received "Hot" passes which allowed us access to the garages and the pits.  Of course, not being a NASCAR fan, I had no idea what to expect.

Thursday morning, early, we headed to Daytona and our experience began.  We walked into the pits and I knew that this was going to be fun.  With access to the garages, we saw all the cars being worked on and my brother, who is an avid autograph collector, showed us how to chase autographs.    It was like learning at the foot of the master.  He came armed with photos and other memorabilia to have signed by the drivers and other car guys.  We attended the driver's pre-race meeting and got to watch the Dual 120 race - one race in the stand and one in the pits.  It was awesome.

On Friday, we returned and all the guys took a pace car ride around the track.  We collected more autographs and left the track exhausted and ready to go home the next day.

Here are some highlights of our trip to Daytona: 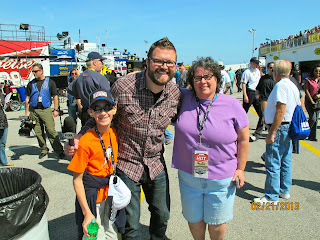 Photo op with Rutledge Wood from the American version of "Top Gear."  He was by far, the sweetest celeb ever. 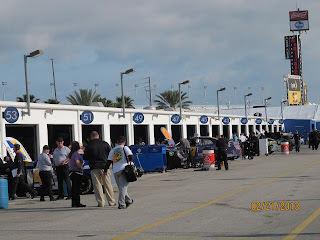 Glancing down the row of garages. 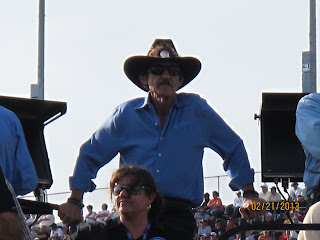 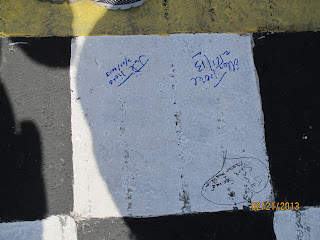 We followed tradition and signed our names on the start/finish line.  Our "John Hancock's" are at the top of the block.

Cool!
Thought I'd get to hear the story behind "toleration" ... maybe that's a post for another day.
Just glad you weren't there when that car exploded into the audience.

we used to go to the Nascar races at Atlanta Motor Speedway when the Boss worked for Lowe's and we would mingle with Jimmie Johnson....I loved it...we had seats close to the track and it was fascinating to see the endurance these men have to keep up that speed and go around that track for so long....I loved the noise the Boss hated it....fun thing to experiance...