Last night, my son went to the senior prom. He escorted a lovely young woman, a classmate, who wanted to go with my son because he likes to have fun.

They made a handsome couple, she in a lovely dark peach gown and he in a black tux. They were part of a group of about 35, some of whom were dating couples and some who were just friends. They all looked great, the young men in tuxes of various styles and a variety of colors and styles of ties and vest to coordinate with their dates dresses and the young women where beautiful with no two wearing the same color or style.

They rented a party bus to take them to the prom and then drive them to the shore afterward. The inside of the bus was a teenagers delight with a black interior, glowing neon lights, a smoke machine and enough speakers to shake the bus. The bus included a host to oversee the group and let the driver do his thing. As a mom, I was relieved that no one had to drive to the shore at such a late hour.

Of course the evening was not with out adventure for mom and dad. Because of the fires in the pinelands on Wednesday, our son could not drop his car off at the shore house to have it there to come home. So being a kind mom and dad, while our off spring was dancing the night away, we drove formed our own "wagon train" and my husband drove his car to the shore house and I followed to bring him home. It was a four hour trip, but well worth it so that our son would not have to drive there so late at night. I estimate that the happy prom goers did not arrive at the shore until about three a.m.

So today I am tired and will spend the day at home. The dustiest and dirtiest part of the laundry room make over is done and now I can begin the task of ridding the first floor of the spackling and saw dust and other assorted forms of grime. Of course Monday it starts again as a new floor will be installed in the kitchen and laundry room. 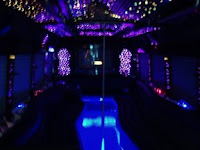